Footy Boss - What is your Boss Score?


We need a more engaging and useful review of game and season performances.

We're adding some more bits and pieces to the existing statistics. What do we have in mind?


How exactly will these be calculated? We calculate a ‘Boss Score’ for each match, which is a tally of all of team statistics for the match with a weighing applied to every statistical category.  This weighting is required to ensure that a player from any position could potentially get the highest Boss Score for a game should he dominate the relevant statistical categories in that position.

We can then use this score to determine the winner of the new Match, Club and League awards as listed above.

Follow the link below to read more about the current iteration of Footy Boss.
http://footyboss.com.au/game-info/

Email ThisBlogThis!Share to TwitterShare to FacebookShare to Pinterest
Labels: Gameplay

Footy Boss - A League Of Your Own.

This will be an invitation league where participants can create and invite 11 other friends to join that league, or they can just join an already created league that is requesting participants.

These ‘Private Leagues’ will have no baring or effect on your Global League as they will essentially be a ‘best team vs best team’ scenario where Physical Condition is not taken into account (ie. players will always be 100% Physical Condition and no injuries will be sustained in these games).

This new aspect will augment our current challenge match system, but gives you some more strategic game play in addition to your current professional league.


Follow the link below to read more about the current iteration of Footy Boss.
http://footyboss.com.au/game-info/
Posted by Unknown at 8:30 AM No comments:

Email ThisBlogThis!Share to TwitterShare to FacebookShare to Pinterest
Labels: Gameplay


We're changing the process of lineup and tactic selection for each match so that the deadline to submit will be 7pm AEST the day before any match is scheduled to be played.  After this deadline, the opposition’s lineup / tactics will also be uploaded to your pre-game field display. These lineups / tactics are obviously locked at this time until the game is completed.

This is designed to make our new ‘View Live Match’ option for participants a bit more exciting and interesting.  This will be telecast on 5pm AEST of game day.

Follow the link below to read more about the current iteration of Footy Boss.
http://footyboss.com.au/game-info/
Posted by Unknown at 7:00 AM No comments:

Email ThisBlogThis!Share to TwitterShare to FacebookShare to Pinterest
Labels: Visualisation


We've got a new feature coming to make player trading more interesting, as it seems the current auction system is not getting as used as much as we expected.

Footy Boss will have the ability to trade players in a new Trade Centre as an alternative to buying / selling players on the existing Player Market. A Manager will be able to list squad members to be traded and of course view other members from different clubs, that are also listed to be traded.

To assist with trades, all players in the game will now have a nominated Trade Value.  This will represent the player's standing and value in the game, taking into account their talent, skills and age. Any proposed trade can incorporate up to 3 players from each team however the ‘Total Trade Value’ of all player involved must be within 20% of each other. This will help keep trades fair, and prevent potential exploitation of the trade system.

You will be able to make an offer to trade for any player in the Trade Centre, however any deal must be accepted by the other team for it to be valid.  You will likewise also accept or decline any offers for your players listed in the Trade Centre.

We hope this will encourage some more player movement between clubs, and provide options for cash-strapped managers.

Follow the link below to read more about the current iteration of Footy Boss.
http://footyboss.com.au/game-info/

Posted by Unknown at 8:00 AM No comments:

Email ThisBlogThis!Share to TwitterShare to FacebookShare to Pinterest
Labels: Trading 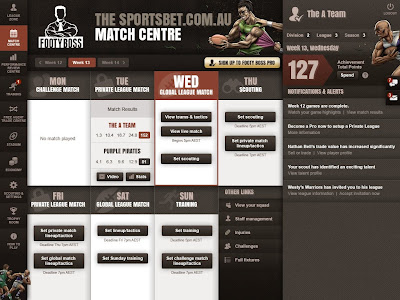 The final preview we're showing in this series is of the new match centre.

This is where you go to find upcoming matches, and set up weekly training and tactics options.

Previously we had a big long list of items for the entire season. We hope this new stream based view will make it easier to keep on top the weekly management tasks.

Follow the link below to read more about the Season Schedule in the current iteration of Footy Boss.
http://footyboss.com.au/game-info/season-schedule/
Posted by Unknown at 1:47 PM No comments: 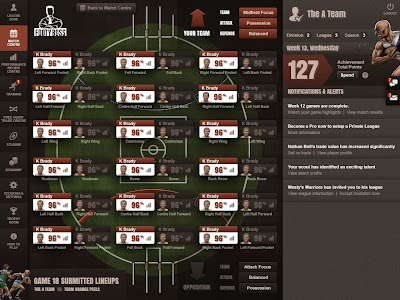 One of the great things about FB is the sheer number of statistics available which allow you to tweak and control your team strategy.

One of the not so great things has been trying to find the relevant statistics which might have influenced a particular game.

Well, we've solved that problem. You will soon be able to view all players in a match, with their statistics. This includes the opposition players, matched up position against position with your team.

We hope this will shed a lot more light on the how and why of wins and losses per match. We can't wait to see how this will impact the play experience!

Follow the link below to read more about the current iteration of Footy Boss.
http://footyboss.com.au/game-info/
Posted by Unknown at 8:00 AM 3 comments: 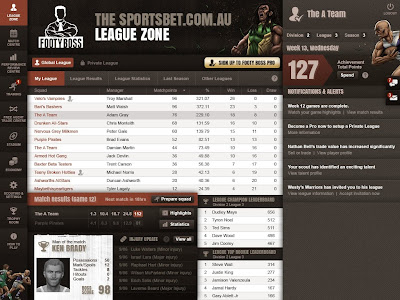 One of the challenges we've faced is getting our game to look great in a desktop browser, but also be usable on a tiny mobile screen!

Currently FB can be difficult to use on a small screen, so to start the process of fixing this problem, we've introduced a new fluid layout for our GUI screens. The centre column will resize depending on your screen resolution, which will be great for those pages with many columns of data.

You can also see in the screenshot that we're working on Private Leagues! This means you can set up a league with just your mates, the rest of the office or... I'm sure you get the idea.

Still no word on when these changes will go live, but rest assured we're working super hard to get things ready to ship!

Follow the link below to read more about Leagues in the current iteration of Footy Boss.
http://footyboss.com.au/game-info/leagues/
Posted by Unknown at 8:00 AM No comments: 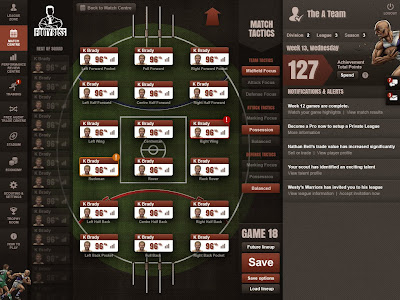 Greetings Punters, SW from Team FB here. I'm kicking off the dev blog with a preview of our new lineup selection interface.

This has been asked for by many players, and we hope this particular interface will make viewing and changing your lineup much easier! This type of interface is also much more in-line with what coaches expect to see when setting up the field for a game.

You will also notice many other improvements in the interface which is going to take our second release to a whole new level of playability.